Home > Where We Serve > Virginia > Norfolk 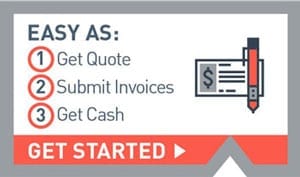 Get started with our Norfolk invoice factoring and accounts-receivable financing programs in just three easy steps.

Step 1: Contact TCI Business Capital to get a free quote and approved in just 15 minutes.

Step 2: Once you’re approved and setup, send your invoices to TCI Business Capital.

Step 3: Get cash. We’ll deposit up to 95 percent of your invoice amount into your bank account same-day.

Once your customer pays the invoice, the remaining amount is transferred into your account, minus our guaranteed, low rate. It’s as easy as that.

Companies choose our Norfolk accounts-receivable financing and invoice factoring programs because of our flexibility and custom programs.

We provide funding to companies in a variety of situations. From start-ups to expanding companies, they all need steady cash flow. Companies that are unable to obtain sufficient funding from a bank because of credit, tax liens or bankruptcy can still utilize our creative financing solutions. Even when the bank says “no,” TCI Business Capital can help.

Get started now with our flexible programs and get the cash you need today.

Over 22 Years of Experience in Many Industries

TCI Business Capital has years of experience which is why many choose us over other factoring companies in Norfolk. We’ve provided cash to businesses in many industries including:

Norfolk is the second largest city in Virginia behind Virginia Beach, and considered to be the commercial, cultural, historic and urban center of the Hampton Roads area which stretches from the Chesapeake Bay to the Elizabeth River. In addition to being a major military and transportation point, Norfolk is also a burgeoning hotspot for tourism with its entertainment, restaurants and shopping centers. It doesn’t hurt that it is also bordered by several bodies of water, and boasts many miles of oceanfront and riverfront property.

Norfolk was created as a settlement in 1636, and formally incorporated into a city exactly one hundred years later in 1736. During the Revolutionary War, Norfolk was a point of major contention. The population at the time was heavily Loyalist, with most residents wishing to remain under British rule. However, they were routed from the city by revolutionary forces and subsequently burned the town to the ground, with only the Saint Paul’s Episcopal Church surviving. Later, during the Civil War, Norfolk was the site of one of the most iconic battles in the history of the war. The naval battle between the Monitor and Merrimac was the first meeting of two ironclad ships, and ultimately ended in a stalemate as neither could damage the other’s tough armored plating. This was such a critical development at the time that the major naval powers of the era, Great Britain and France, both immediately halted construction on conventional wood-sided ships and exclusively began construction on the more impenetrable versions used by the Americans. Another major expansion for Norfolk came during World War I, when the Norfolk Naval Base grew exponentially. So much so, that the need for more housing arose which in turn trickled down to all facets of the city’s economy and makeup. 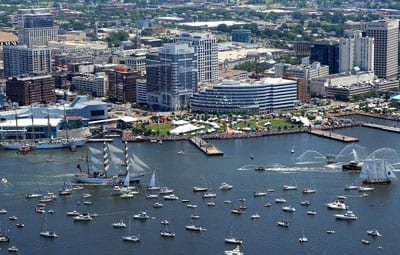 Today, Norfolk is a busy metropolis that has grown significantly but its focus is still very much on its waterfront location and history with all things naval and ship related. The number one thing to do in Norfolk is visit Nauticus, an attraction that sits on the Elizabeth River that is both an aquarium and a naval history museum. With several tanks featuring both local and exotic marine life as well as exhibits detailing the history of naval warfare and technology, there is plenty here to see and learn about. Nauticus also houses a beautiful and grand event space called the Half Moone Cruise and Celebration Center that is perfect for upscale dining and parties. The crown jewel of the facility is the USS Wisconsin. This battleship is anchored just outside the museum is one of the largest ever built. It originally set sail in 1943, two years to the day after the attack on Pearl Harbor and continued in active service up until 1991 when it performed its final tour in the Persian Gulf War. Today, guests can walk over each of the Wisconsin’s decks, get inside, and learn about life on a battleship.

The Nauticus Museum isn’t the only way in Norfolk to enjoy the water. Locals and tourists alike are encouraged to explore both the river and the bay in a number of ways. Kayaking is a great way to get around and spend a relaxing day out on the waves with friends, or go crabbing in the bay and catch some of the world-famous seafood that can make for a perfect family dinner. Speaking of sport fishing, charter fishing boats leave the docks every day, and are an excellent chance to go out and land the big one. There are also educational harbor cruises, which are tour is given by boat that outline the rich history and topography of Norfolk. For a romantic evening, take a leisurely cruise in one of the paddlewheel ferry boats. In addition to a relaxing trip down the river, these boat rides often come with delicious dinners and live entertainment.

Downtown Norfolk also has its share of nightlife and great cuisine. Granby Street is the historical center of the bar and restaurant scene, having been a focal point for the town way back when it was first created. There are many places to enjoy your evening here and at every price point too. Visitors have all kinds of options, from a fancy, white tablecloth dinner to quick grab-and-go street food. The same goes for the bar scene as well. Norfolk is home to dive bars and fancy cocktails alike, so whatever mood you’re in there’s always a good drink to pair with it. Downtown Norfolk is also a great place to catch a concert. The NorVa is the premier show venue in the city, and it has played host to all kinds of acts, but attracts particularly good rock acts. In fact, the NorVa was named as THE place that rocked the hardest by the readership of Rolling Stone magazine.

Live music is actually central to the culture of Norfolk, as there are several arts and music festivals that take place there every year. There’s the Bayou Boogaloo, a celebration of Creole music and cuisine. This festival takes the locally caught seafood and kicks it up a notch with Cajun flavors, all to the background of the lively jazz of New Orleans. There’s also the Latino Music Festival, the Beer Festival, and a twice-a-year wine festival that attracts wine lovers from miles around. The biggest one of them all is Harborfest. This massive festival completely takes over the Norfolk waterfront, and then some. The harbor gets turned into a fairgrounds, with a carnival-style arcade full of games and food booths lining the streets. There is also a veritable fleet of ships that will come from all over the country to dock, be displayed, and even offer rides to fairgoers. There is also a significant amount of life music that is featured during Harborfest. Of course, there is a giant stage where national acts are invited to come play, but Harborfest also hosts Buskerfest, a celebration of the creativity and talent of street performers. Each year, there are five separate stages that host some of the best street performers around, and of course there is always room for walk up performers as well.

While Norfolk does not play host to any major sports teams, that doesn’t mean there’s nothing to do for those who enjoy going to watch a game. The Norfolk Tides are a Triple-A baseball team that play in Harbor Park down by the waterfront. The Tides are associated with the Baltimore Orioles, and act as a farm team for the major league squad. The Tides certainly hold their own, as they have been in the championship series and have won the Governor’s Cup (the trophy for the International League champions) five times. Catching a baseball game is always a great way to enjoy the weather, but more so at Harbor Park, which was voted the Best Minor League stadium by Baseball America. If baseball isn’t your thing, Norfolk also has the Admirals, a minor league hockey team. Just like how the Tides are a farm team for the Orioles, the Admirals players are contracted to the Anaheim Ducks and frequently these players get called up to the big leagues. The Admirals home ice is a stadium called The Scope, a massive domed building that was designed to reflect the buildings constructed for the very first Olympic Games.

Norfolk’s economy is rooted in its position at the mouth of the Chesapeake Bay. Just like when it was first chartered, the constant import and export of good is essential to a healthy economy for the city. The nearby Naval Base is also a major contributing factor to the economy, providing thousands of jobs and millions of dollars in spending money that gets pumped in the local economy. This installation is the current headquarters of the Atlantic Fleet which are the cast majority of the ships that patrol the Atlantic Ocean. The base is also home port for the 2nd Fleet, which is made up of approximately 62,000 active duty personnel, 75 ships, and 132 aircraft. . Tourism has also become an increasingly important part of the economy, as a revitalized downtown area attracts more and more people each year. Additionally, the Nauticus museum added a cruise ship dock which brings in over 100,000 cruise -g

Invoice factoring improves cash flow by enabling companies to immediately access the cash that is tied up in their open...
Read More

What Should I Have on My Invoice?

Helpful Questions to Answer When Invoicing Once work is completed, the first thing that comes to mind is payment. Having...
Read More
I went to a number of Banks in my area and all I heard was 'No'. During my initial consultation with TCI, I kept hearing, 'yes, we can work with you on that. – Brian H.
©2023 TCI Business Capital 1-800-707-4845 a division of Fidelity Bank